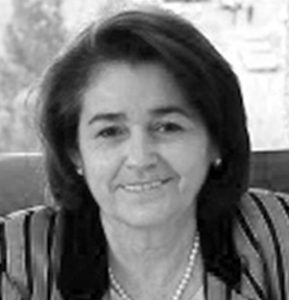 Dr. Tinajero is Dean of the College of Education and Professor of Bilingual Education at The
University of Texas at El Paso, where she also directs the nationally acclaimed Mother-
Daughter/Father-Son Programs. Dr. Tinajero is a noted author and featured speaker in the field of gender equity, cultural diversity and in the recruitment and retention of Hispanic students in higher education. Dr. Tinajero specializes in staff development and school-university partnership programs.

A consultant to school districts, publishing companies and universities throughout the United States, Tinajero has been a keynote speaker and presenter at numerous international, national, state, regional and local conferences.

She has served as PI, co-PI and director of numerous multi-million dollar grants from the U.S.
Department of Education, private foundations and corporations, including serving as co-PI the
nationally recognized TNE—Teachers for a New Era grant from the Carnegie Corporation of New York focused on enhancing the knowledge and skills of pre-service and in-service teachers. She has been a director of Project ACE—Action for Equity funded through WEEA—Women Educational Equity Act, Project BEEMS—Bilingual Education with an Emphasis in Math and Science, and Project LEAP UP—Learning, Educating and Planning to Uplift the Profession.

As a current member of the Board of Directors and past President of both the National Association for Bilingual Education (NABE) and the Texas Association for Bilingual Education (TABE), Dr. Tinajero has had national impact on the education of K-20 students. She is also a current member of the Governing Board of the National Network for Educational Renewal—NNER, and has served on the AACTE Board of Directors and AACTE’s Committee on Women’s Issues.

Dr. Tinajero has served on state and national advisory committees and boards for standards development, including the English as a New Language Advisory Panel of the National Board of Professional Teaching Standards and the Texas Reading Academies.

She has received numerous awards, including the Chancellor’s Council Award for Teaching Excellence from the UT System/UTEP, the prestigious Eleanor Roosevelt Award from the American Association of University Women, and the Multicultural Educator Award from the
National Association for Multicultural Education and was honored with the Texas Higher Education Star Award for the Mother-Daughter Program. Dr. Tinajero also received the Humanitarian Award from LULAC and was named one of 20 Most Influential Hispanics in the U.S. by U.S. Hispanic Business Magazine and the Texas Professor of the Year by the Carnegie Foundation for the Advancement of Teaching and the Council for the Advancement and Support of Education.

She holds a BS degree in Elementary Education/Reading and an M. ED. in Supervision and Administration from the University of Texas at El Paso. She holds a mid-management certificate from Our Lady of the Lake University in San Antonio and a Doctorates degree in Curriculum and Instruction with an Emphasis on Bilingual Education from Texas A&M University/Kingsville.