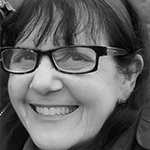 Miriam Eisenstein Ebsworth, Ph.D., currently represents the Eastern region of NABE (including Puerto Rico) and has just begun her tenure as NABE secretary.
Miriam has a hybrid multilingual multicultural identity. A native Yiddish speaker with dominance in English, Miriam is also bilingual in Spanish and Hebrew, two of her heritage languages. Born in Brooklyn, New York, her extended family is broad including family members who hail from Argentina, Puerto Rico, Panama, Montreal, Wales, England, and China.
She earned a Bachelor’s in French and Early Childhood Education from Brooklyn College, a Master’s in TESOL from Columbia University Teachers College, and a Ph.D. in Linguistics from the City University of New York, Graduate Center. She studied French in high school and college and attended the Cours de Civilisation Francaise at the Sorbonne in Paris. She studied Spanish at Estudio General Lulliano in Mallorca, Spain. A lifelong language learner, Miriam is currently studying Putonghua (Mandarin Chinese).
Miriam Eisenstein Ebsworth began her teaching career as a licensed TESOL, Bilingual (Spanish/English) Early Childhood teacher working with Emergent Multilingual Learners in Brooklyn, N.Y. She went on to teach students at risk including English learners and speakers of African American English at Rutgers University in Newark, NJ. She also taught classes at Fairleigh Dickinson University and New Jersey City University, and has extensive experience doing language teacher supervision and professional development in the NY/NJ Metropolitan area. She started teaching at New York University in 1979 where she has just completed her 41st year as a full-time faculty member.
The recipient of the NYSABE Bilingual Teacher of the Year award, the NYU Steinhardt Teaching Excellence Award and the NYSTESOL Outstanding Teacher Award,
Miriam is a teacher educator, researcher, and advocate in the fields of Bilingual Education, TESOL, Second Language Acquisition, and Applied Linguistics. She is currently Academic Director of the English program for the families of international students at New York University, Past Director of PhD Programs in Multilingual Multicultural Studies (1995-2019); co-chair of the ELL Think Tank at NYU, and organizer of the first and second Research and Evaluation Institutes at NABE. She serves on the editorial boards of The Journal of Writing and Pedagogy where she was Research editor (2011-2020), The Bilingual Research Journal, The Journal of Language and Linguistic Studies, the How Journal of ASOCOPI (Colombia), and the Advisory Board of the NYS TESOL Journal.
Miriam’s research interests include using technology in second language pedagogy, second language academic writing, heritage language preservation, language variation, and intercultural pragmatics. She is a consultant for the UN in the continued development of Actionthroughwords, a website for English learning whose content explores the UN work for peace and health worldwide and has appeared in “The Three R’s,” a film exploring academic language and the T.V. show Public Voice Salon.